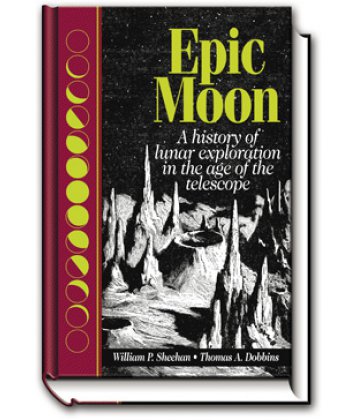 Epic Moon, A history of lunar exploration in the age of the telescope

The Moon has always been one of the most obvious and in some ways the most enticing astronomical objects – even from early times, it was Queen of the Night, and the naked eye sees more detail than even the largest telescopes reveal on Mars.

As early as 1609 Galileo’s first telescope showed the Moon to be another world. The Moon has thus been the object of intense study not only since the 1960s but for at least the previous three and a half centuries. The eye arrived before the boot. By the same token, the first “race to the Moon” was not undertaken by American astronauts and Soviet cosmonauts but by German and British selenographers in the nineteenth century, who mapped lunar detail so painstakingly that by 1878 – the year Julius Schmidt of the Athens Observatory published his great Moon map and also the year that Congress organized the United States Geological Survey and assigned to it the task of making large-scale maps of the United States and its territories – it could be said without exaggeration that the earthward hemisphere of the Moon had been depicted in greater detail and with more precision than many parts of the American West were depicted in existing maps of the time.

In part, the reason for the long preoccupation with lunar surface details lay in the fact that the mapping of the Moon provided a form of therapy for astronomically inclined obsessive personalities, whose monomaniacal tendencies were drawn to the seemingly inexhaustible project of recording the multitudinous features visible in even a six-inch telescope. In part, too, it lay in the partiality of selenographers for the project – first systematically pursued by Johann Schroeter, the Lilienthal magistrate, at the end of the eighteenth century – of discovering evidence of minor changes in the lunar surface. What became a Promethean quest for changes – veils, clouds, landslips, eruptions – was initially tied in with the theory that the lunar surface features had been formed by volcanic eruptions; however, it curiously survived the demise of the volcanic theory and still shows intermittent gasps of life in the largely amateur-driven search for transient lunar phenomena, or TLP.

The long era of pre-Apollo lunar studies is a fascinating subject that has never been told in detail. “No other book, recent or not-so recent, is devoted to the history of lunar studies with telescopes” (Clark R. Chapman). Though there was a lapse of interest in the Moon in the immediate post-Apollo era, there has been a recent “return to the Moon” with the successful Clementine and Lunar Prospector missions. There is also growing evidence of a return of amateur observers to the Moon as an object worthy of their attentions. This is understandable inasmuch as the Moon remains the most accessible planetary realm; it is, moreover, the only alien world open to geological prospecting from the eyepiece of the backyard telescope.

In that sense, this book is – like the Moon itself – both timely and timeless. The story of mankind’s endless fascination with the world of the Moon and the gallery of interesting characters who pursued the details of the lunar surface with often strange intensity is a modern-day epic. Many of the stories recounted for the first time here will still be recounted generations hence, when the Apollo explorations may seem a mere interlude in what has actually been a more sustained and more significant era of endeavour. It is possible that the names of Schroeter, Beer and Madler, Webb and Schmidt may prove to be as memorable as those of Armstrong, Aldrin, Cernan and Schmitt.