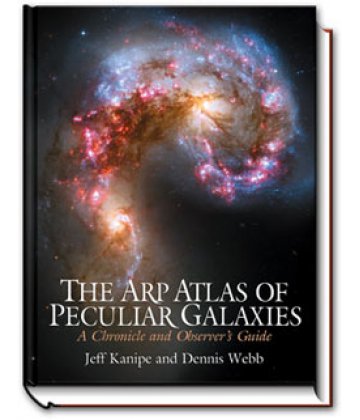 The world of interacting galaxies is extremely interesting. Although not an easy task, they can be observed by amateurs as well. This English language book helps in observing and learning interesting facts about these peculiar galaxies.

In 1966, astronomer Halton Arp compiled his Atlas of
Peculiar Galaxies, which featured 338 images of some of the strangest looking galaxies and galaxy groups then known to exist. The purpose of the Atlas, Arp stated in his preface, was to graphically present structural peculiarities in galaxies \"in order to build a realistic picture of what galaxies are really like.\" At the time, astronomers were struggling to formulate a workable taxonomy of \"symmetrical\" galaxies using classification schemes such as Edwin Hubble\'s tuning fork diagram. But the Atlas was comprised of the \"Elephant Men\" of galaxies, and their deformations challenged and defied astronomers\' attempts at galaxy classification.

Although the Atlas itself has been long out of print, this book not only reproduces all 338 of the original Atlas of Peculiar Galaxie\'s images, including Arp\'s preface, it also presents new images of all Arp galaxies taken by amateur astronomers, along with finder charts and observing notes.

In addition, it provides a chronicle of Arp\'s saga, from his early work at Mount Wilson and Palomar, where the original Atlas was assembled, to his controversial research on discordant redshifts.

Although Arp\'s astrophysical interpretations have sparked controversy among his peers - the giants of professional astronomy - his story has stoked the interests of amateur astronomers throughout the world who want to know more about the man and his catalog of peculiar galaxies.

In addition to Arp\'s story, the book also provides amateurs with a complete guide to observing the Arp galaxies. Today, even with the advent of large-aperture amateur telescopes and affordable CCD cameras, this is admittedly an ambitious undertaking, but the Observing Guide will help put many of these unusual galactic specimens within reach of both observers and imagers. Even with 8 and 10-inch telescopes, the peculiarities of nearly 20 Arp galaxies can be detected.

Whatever size telescope you have, however, the point is not to just look for an Arp galaxy, but to observe the unusual structures produced by galactic interactions, gravitational tidal forces, and inherent dynamics. To help you identify these structures, the guide provides detailed diagrams of each Arp field. What can you see? Counter-tails, rings, jets, \"wind\" effects, plumes, galaxy chains, single- and multi-armed galaxies, and other oddities. Such features may task your imaging and observing skills, but they are what make the Arp galaxies so intriguing. Observers seeking new challenges, a good story, and an important piece of astronomy history need look no further than The Arp Atlas of Peculiar Galaxies: A Chronicle and Observer\'s Guide.

Skywatcher telescopes on StarQuest mount
From 218.44 €