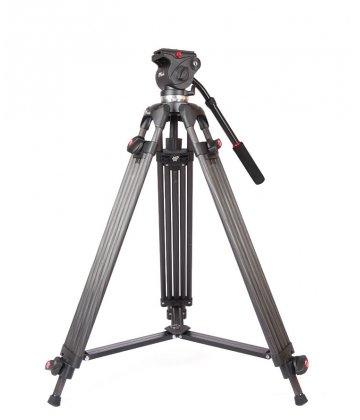 TriLac35 - Fotostativ Tripod with Fluid Videokopf
All serious natural observers know that an optic or a photo camera can only develop its potential when it is placed on a solid tripod with a stable head. Stability, ease of pivoting are just as important as fast deployment and total weight.

The TriLac35 Tripods with Fluid Video head is a tripod that meets the requirements described above and does not need to be ashamed if it is far more expensive Tripods in the 700 to 1000 EUR class. The tripod is - maximally extended - 160cm high, but weighs only about 3 kg (alu legs) and carries the nearly 1 kg heavy fluid head. The quick-change plate is compatible with all Manfrotto Quick-Release systems (see photo at the top left) and has both 1/4 "and 3/8" camera and lens connections. A locking groove prevents the inadvertent failure of the rail.

Very clever is also the connection between the head and tripod. Although the head can be mounted and dismounted with a single grip screw without any tools, the leveling can be adjusted by the movement of an inverse ball head. We no longer have to pull out the legs individually for the horizontal plane and laboriously adjust their length. The inverted ball head will allow about 12 degrees "unevenness" (see photo below)

The fluid head is a pleasant surprise for anyone who has never worked with such a system. The fine adjustment goes completely without jerks, the swivel movements can be easily started and just as easily braked. In video work, no jerks will be noticeable. The approached position is also held exactly, no "jump" is perceptible after we have released the arm, as is often (not only) with inexpensive photo heads. The lateral screws allow the resistance to be adjusted sensitively, for light cameras as well as for instruments weighing up to 5kg. The head carries cameras weighing up to 12 kg ("load-bearing capacity" is the same as for general photography, not astronomical devices). The guide arm is slightly curved and can be mounted on both sides of the head - a pleasure for left-handers!