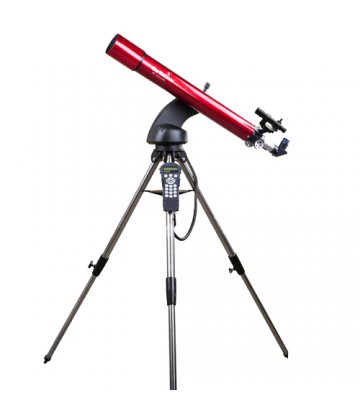 SkyWatcher 80/900 Star Discovery GoTo is a mid-range beginners' scope. Recommended for beginners requiring a slightly more powerful telescope. The focuser is made of metal, just like its finderscope, which can be removed from the telescope in a second for transportation. The objective lens is a 80mm air spaced Fraunhofer lens with 900mm focal length gathering 31% more light than the 70mm model, with increased resolution. Under perfect conditions even the Cassini-division can be observed in Saturn's ring system, or the Great Red Spot on Jupiter can also be observed, just like martian continents. Under dark skies many globular clusters and some galaxies can also be seen. The telescope comes with two WA eyepieces (10 and 23mm) resulting in 90x and 39x magnifications. The scope can be used with Amici-prism as well which provides an erect image for daytime observations.

Do you know that the SynScan Version 4 hand controller is able to fully drive the huge EQ8 mount?
The patented Freedom Find (dual-encoder) technology allows the telescope to be moved manually whenever the user wishes - but with no need for re-alignment!”
The very same SynScan Version 4 hand controller is used on the Star Discovery mount. The SynScan Version 4 handset can drive the Sky Discovery mount to any object selected from its huge 42000+ object database, including objects from Messier, IC, NGC and Caldwell catalogs, the planets, named stars, double stars, variable stars and even user-defined objects like new comets.
The Star Discovery mount includes digital encoders and the patented “Freedom Find TM” technology like the big Sky-Watcher EQ8 mount. After moving to a new object the telescope will automatically begin to track the new object accurately. No re-setup is required in one observing session.