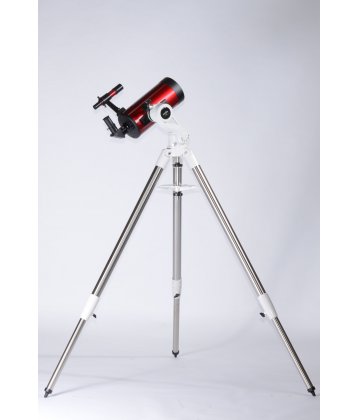 This 127mm compact Maksutov-Cassegrain telescope shows much more details than the 90mm and 102mm models. The central obstruction is 30% only, resulting in contrasty image even at high magnifications. Compared to similar aperture telescopes (eg. 130/650 Newtonians) this Maksutov-Cassegrain is much shorter and weights less meaning that it is easy to transport. The recommended magnification range is 37.5x-250x and provides sharp images on Moon and planets. Dovetail plate is included but there's a standard photo thread as well. The two eyepieces provided deliver 52x and 130x magnification. An achromatic 6x30 spring load finderscope is included. The focuser has a T-thread making it possible to mount cameras as well.

The new AZ5 tripod is a mixture of AZ4's optimal geometry and the AZ3's precision. This azimuthal tripod is ideal for environmental, panoramic or even astronomical use. The attached telescope remains in balanced postion so it can be easily fixed in every position from Horizon up to Zenith. The arm can be fixed in more positions regarding to the observation's needs.  The precisional movements can be made with the flexible arms which allows small panning on the selected objects. This version including a rock solid steel tripod.