Heart of Darkness: Unraveling the Mysteries of the Invisible Universe (Hungarian) 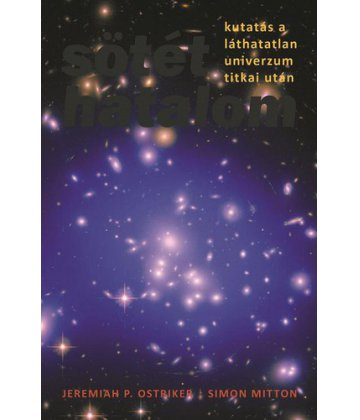 Heart of Darkness: Unraveling the Mysteries of the Invisible Universe (Hungarian

Heart of Darkness describes the incredible saga of humankind's quest to unravel the deepest secrets of the universe. Over the past thirty years, scientists have learned that two little-understood components--dark matter and dark energy--comprise most of the known cosmos, explain the growth of all cosmic structure, and hold the key to the universe's fate. The story of how evidence for the so-called "Lambda-Cold Dark Matter" model of cosmology has been gathered by generations of scientists throughout the world is told here by one of the pioneers of the field, Jeremiah Ostriker, and his coauthor Simon Mitton.

From humankind's early attempts to comprehend Earth's place in the solar system, to astronomers' exploration of the Milky Way galaxy and the realm of the nebulae beyond, to the detection of the primordial fluctuations of energy from which all subsequent structure developed, this book explains the physics and the history of how the current model of our universe arose and has passed every test hurled at it by the skeptics. Throughout this rich story, an essential theme is emphasized: how three aspects of rational inquiry--the application of direct measurement and observation, the introduction of mathematical modeling, and the requirement that hypotheses should be testable and verifiable--guide scientific progress and underpin our modern cosmological paradigm.

This monumental puzzle is far from complete, however, as scientists confront the mysteries of the ultimate causes of cosmic structure formation and the real nature and origin of dark matter and dark energy.

Jeremiah P. Ostriker is professor of astrophysical sciences at Princeton University. His books include Formation of Structure in the Universe and Unsolved Problems in Astrophysics (Princeton). Simon Mitton is affiliated research scholar in the history and philosophy of science and a fellow of St. Edmund’s College, University of Cambridge. His books include Fred Hoyle: A Life in Science and The Young Oxford Book of Astronomy.