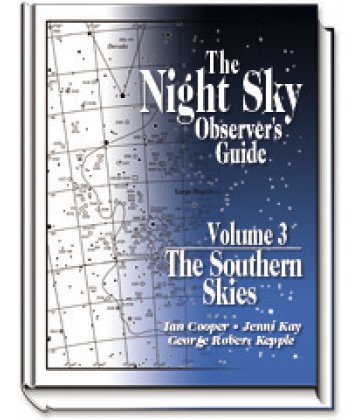 From the reviews of Volumes 1 and 2

A subtitle to the two-volume Night Sky Observer’s Guide could have been Burnham’s Celestial Handbook: The Next Generation... (it is) a bible of very deep-sky observing, taking objects constellation by constellation with full page charts and numerous smaller finder charts and drawings. Tables list variable and double stars, and a few individual stars are highlighted. But the meat of the volumes is the descriptions of galaxies, nebulae and star clusters as they appear through a variety of apertures. If you’re looking for targets to keep you busy and challenge your observing skills, the Night Sky Observer’s Guide has come to your rescue.

…Birders have their bible in the form of Roger Tory Peterson’s field guide. Bird illustrations, descriptive text, and maps comprise a guide used by birders for decades. Now apply that strategy to observational astronomy and you’ll have The Night Sky Observer’s Guide... the Observer’s Guide’s generous use of maps, drawing, and photos places it squarely in the realm of a bona fide field guide... an exemplary guide to the deep sky.

Amateur astronomers today are exceptionally fortunate to be living in an era when high quality, and very large, optics are so affordable. In the first half of the 20th century the telescope deluxe for the amateur was the 6-inch refractor. However, such telescopes were so expensive that very few amateurs could afford them: the majority of stargazers had to content themselves with instruments in the 60mm range. Consequently, most observing guides published during that time emphasized double and multiple stars, with honorable mention for variable stars and planetary nebulae, objects which do well in long focal length refractors. Webb’s 1858 Celestial Objects for Common Telescopes and Olcott’s 1936 Field Book of the Skies were not superseded for so many decades simply because the average amateur instrument did not dramatically improve during the century after Webb. By the 1950s the mass-produced or homemade 6-inch parabolic mirror brought medium-sized optics into the price range of the average amateur, and with it the emission nebulae, open clusters, and galaxies that had been seen only as amorphous blobs-if seen at all-in small refractors. The 1948 Skalnate Pleso Atlas of the Heavens had already displaced the classic Norton’s Star Atlas as the frontline sky-chart for amateurs, but the observing guides badly needed rewriting. However, not until the 1970s and Burnham’s Celestial Handbook was there an observing guide worthy of the 6-inch Newtonian reflector or of the more expensive, but increasingly popular, 8-inch Schmidt-Cassegrain telescope.

By the early 80s another revolution in amateur optics was underway thanks to the inexpensive and easily-constructed mounting for large aperture Newtonian reflectors invented by John Dobson. With these big “light buckets” one can see scores of emission nebulae, hundreds of star clusters, and thousands of galaxies, with details visible in virtually all of them.

But once again observing literature failed to keep pace with the optics. The purpose ofThe Night Sky Observer’s Guide was to close this re-widened gap by providing the owner of a medium or large

aperture telescope with some idea of what to look for in such instruments—both what objects can be seen, and what details may be seen within these objects. It all began in 1987 when George Kepple and Glen Sanner, founded the Observers Guide, a bi-monthly magazine that set out to describe, with their readers as active participants, what could be seen with telescopes 8-inches and larger from mid-northern latitudes. Unlike an ordinary magazine it would have a finite life because each issue was devoted to one-or occasionally several smaller constellations. When completed in the early 1990s 64 constellations had been covered. Based upon that experience the authors began working on what would become The Night Sky Observer’s Guide, a two volume work that was published in 1998 to critical acclaim. However, The Night Sky Observer’s Guide was not yet an all-sky guide—the southern skies, much of which is visible from southern Florida, Texas, New Mexico and Arizona and down to the South Celestial Pole remained to be covered. The problem had always been the general lack of a large number of reliable observing reports from these locations but several things were happening to correct this problem—the migration of observer/retirees to these locations and the rise of the World Wide Web.

In 2003, in search of warmer weather and the pursuit of his lifelong love of astronomy, George Kepple moved from Pennsylvania to the clear skies of southwest. George’s new observing site provided a southern horizon with a view down to declination minus 58 degrees, just 32 degrees short of the South Celestial Pole. With retirement George also had the time to “surf” the WEB looking for methodical observer’s “down under”. He was soon rewarded when he struck up an acquaintance with Ian Cooper of New Zealand. Encouraged by his new observing site and what he found via the web he again approached Willmann-Bell to inquire if there was interest in a “southern” volume. The answer was a resounding yes.

With George assuming the responsibilities of Editor and Ian Cooper providing observational data as co-author, work began. As things progressed other observers were recruited, one of which was Jenni Kay of South Australia who was especially productive and so was asked and accepted a co-authorship. The result of their labors is The Night Sky Observer’s Guide, Volume 3 — The Southern Skies.

While all three volumes of The Night Sky Observer’s Guide are aimed at amateurs especially interested in observing galaxies, nebulae and clusters — double and variable stars have not been neglected. Data tables for these are provided and these stars are labeled on maps and finder charts. Moreover, the most famous or visually impressive of these are given written descriptions similar to those for other deep-sky objects. Splitting doubles is nearly as popular with amateurs today as it was thirty or forty years ago. They offer the observer many fine, and even spectacular, sights in the eyepiece and often can provide an evening of enjoyable viewing when conditions are poor for “faint fuzzies”. Read a Sample Chapter in PDF The number of celestial objects of each type covered in the three volumes of The Night Sky Observer’s Guide are:

In addition there are:

ARRANGEMENT OF THE GUIDE

Volume 4, The Glories of the Milky Way to –54° by George Robert KeppleFor most of my observing life the faint outlines of the Milky Way were obscured by light pollution at my home observatory in Pennsylvania. From time to time I would venture forth to truly dark observing sites like the Texas Star Party for a few days to get a glimpse of this splendor. About 15 years ago I retired and moved to the high desert of Arizona where the Milky Way stands out prominently during the Summer and early Fall. Now, night after night for months on end it is there to greet me. For one who has been observing “faint fuzzes” and other elusive objects since childhood it was, and is, a dramatic and glorious naked-eye sight. With these new-found treasures to tempt me, and plenty of time on my hands I set about re-observing and photographing this fascinating area of the sky. As I progressed I realized that even though I had co-authored three observing books covering the entire heavens there was yet more I could say about the inhabitants of the Milky Way. And indeed there was, I ended up with notes on 1,008 new objects and re-observed 801 others that had been covered in Volumes 1 and 2 of the Night Sky Observer’s Guide and added many new eyepiece impressions and photos.

While it may be a challenge to detect most of the dark and bright nebulae from your backyard, practically all of the 977 clusters can be seen, and when you venture to a truly dark site you are will be prepared with this book.