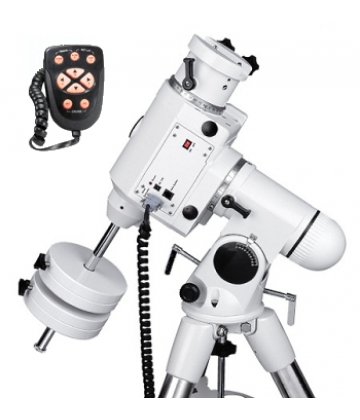 The Sky-Watcher EQ6 SynTrek and Pro GoTo mounts are practically quite similar, the difference is only the hand controller.

This model is equipped with high prevision stepper drives capable of 800x sideral speed (3.4 degrees/sec). The mount can be controlled from the hand controller or from a planetarium program (for example Umi PRO) running on a computer. Thanks to the construction the tracking is much more accurate with much less backlash than the basic model. Autoguider port is included (standard ST4), which makes it possible to capture long exposure photos.

The movement speed is also configurable on the hand controller from 0.5x sideral speed up to 800x. This model does not have GoTo capabilities, but similar functionality can be achieved using astronomical softwares. For example, by using Ursa Minor Pro software the mount can be converted into a fully functional GoTo system. Upgrading can be done by attaching a SynScan (GOTO) hand controller (can be purchased separately).

Functions of the SynTrek hand controller:
- tracking speeds for sideral, solar and lunar imaging
- slow motion control on both axes: 4x, 8x, 32 and 64x
- fast motion up to 800x
- can be used with autoguiders with correction speeds from 0.25x-1x
- directions can be swapped
- power saving mode
- can be used on both hemispheres