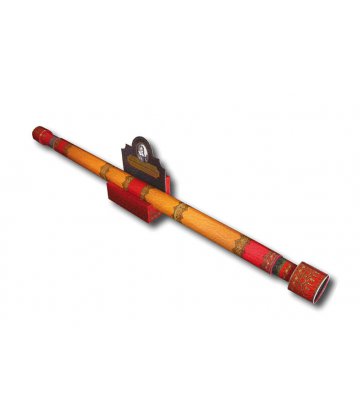 AstroMedia model: replica of the historical Galilei-telescope (manual in Hungarian)

Galilei has completed his telescope in 1609 based on another model constructed a year before. Most of his discoveries (including the lunar craters, phases of Venus, satellites of Jupiter) were made with similar telescopes and were the basis of modern astronomical observations. On the 400th anniversary of these event UNESCO selected year 2009 to be the International Year of Astronomy. This replica is almost identical to the telescope used by Galilei (12x magnification, 78cm total length) and is designed to be a tribute to Galilei. The telescope is ideal for everyone to experience the discoveries made by Galilei. This model, when assembled, can deliver similar optical performance to the one which was owned by II. Cosimo de Medici, and is today on display in the Museo di Storia della Scienza. The telescope delivers small field of view and small magnification.

This do-it-yourself telescope delivers somewhat higher performance than Galileo's telescope. These telescopes were quite popular in the 70s and 80s in Hungary. The kit contains a 40/450 achromatic lens and a 15mm Plossl eyepiece. If more light is needed, 72/900 and 83/900 air spaced achromatic lenses are also available (these require higher class eyepieces as well and a star diagonal). The 40/450 telescope delivers 30x magnification and provides a sharp and well corrected image. The tube can be obtained from any of the hardware stores.

Solar observation requires attention, so this projector is especially recommended for children and schools, as it is perfectly safe to use. The paper-madel modell contains an achromatic lens to project the Sun's disk. Before the disk would be projected onto the paper, a convex mirror (just like in the Cassegrain telescope) reflects the sunlight and also makes the efficient focal length much longer, to approximately 6 meters. The result is a disk with approximately 6 cm diameter, which is perfect to observe bigger sunspots (and also disk of Venus was visible during the 2004 transit). To assemble the instrument, only glue is needed.

The heart of this newtonian telescope is a 6mm thick 70/450 spherical mirror made by Baader and a 2mm thick, 20x28mm secondary mirror. The eyepiece contains acryl lenses and provide 9x, 15x and 30x magnification. The model made of cardboard is a 100% working newtonian telescope, by which it is perfectly possible to observe the craters on the Moon, satellites of Jupiter, and even Saturn's ring can be observed together with moon Titan. Only glue is needed to assemble the model. Keep in mind that although this is a perfectly working telescope, it is still a model and is not designed for serious observing work.

Lacerta Cooling Cover with fan for Newtonians
From 49.87 €

Skywatcher telescopes on StarQuest mount
From 233.51 €